Ripple is hard to understand, but it’s worth making the effort: there’s a deep insight at its core

I spent a couple of hours at the Startupbootcamp Fintechathon last weekend. I was there to share ideas on what types of finance problem are a good fit for block chain solutions – and which ones might be best solved using other techniques.

Up next! Richard G Brown talking about Bitcoin to the "hackers". @gendal #sbcfintech #fintechathon pic.twitter.com/47yXnZaQzL

When I arrived, the audience were deep in videoconference with Ryan Terribilini of Ripple Labs. I thought he did a great job of answering their questions about Ripple and I decided it was time I finally tried to get my head around it.

The conclusion I have come to is that Ripple is built on a really deep insight:

Not all dollar, euro and sterling liabilities are the same.

And Ripple is nothing more than a platform that makes this insight explicit.

Here’s how I finally wrapped my head around Ripple

I wrote a piece last year about how money moves around the banking system. I wrote:

Perhaps the most important thing we need to realise about bank deposits is that they are liabilities. When you pay money into a bank, you don’t really have a deposit… you have lent that money to the bank. They owe it to you.  It becomes one of their liabilities. That’s why we say our accounts are in credit: we have extended credit to the bank.  Similarly, if you are overdrawn and owe money to the bank, that becomes your liability and their asset.

I then explained how the payment system is really little more than a bunch of systems for transferring these obligations around.  Where Ripple encourages us to think more deeply is about whose obligations they are.

Imagine I owe my friend Bob £50 and that we are both customers of Barclays bank. When it’s time for me to pay him back, I instruct a “transfer” online. I tell the bank to reduce what they owe me by £50 and increase what they owe to Bob by £50. The bank remains flat… the only difference is to whom they owe the money.

This is the same story I told in my piece about the payments system.

Richard and Bob both trust Barclays as an issuer of pounds. So Richard can pay Bob by transferring the money inside Barclays

But think about just happened:

Bob still doesn’t have the £50 in his hand… all that’s happened is that somebody else now owes him the money.   But this is just fine for Bob…. He trusted me to owe him the money and he also trusts his bank to owe it to him.

Bob previously had a £50 “asset” issued by Richard. Now he has a £50 asset issued by Barclays. Richard’s debt to Bob is settled and Bob is happy.

But notice how it only worked because Bob trusted both me and the bank.

And also notice that he doesn’t trust us in the same way.   He’d probably be quite happy to have thousands of pounds in his bank account. I suspect he’d be very uncomfortable lending me more than £50.

Not all dollar, euro or sterling asset deposits are the same!  It matters who issues them.

It is highly likely that Bob prefers to be owed money by his bank than by me. £50 owed by me is not the same as £50 owed by the bank.

And this is the Ripple insight.

This is a really powerful observation

Imagine now that the situation is a little more complicated.  Bob and I are sitting in a café. I don’t have any cash and Bob can’t remember his account details. How am I going to pay him?  A Barclays transfer isn’t going to work.

What makes me think Bob would be happy to accept a prepaid debit card from an issuer he’s never heard of? Are they insured? What happens if they go bust before he can spend the cash?

It turns out that Bob doesn’t trust this card… So we have a problem. I don’t have his bank account details and he won’t accept a prepaid debit card. How am I going to pay him?

Conveniently for my story, it just so happens that my friend Carol is sitting at the table next to us. Bob doesn’t know Carol so I introduce them to each other.

It turns out that Carol is trying to buy some goods online and has forgotten to bring her credit card. The goods cost £50 and she just happens to have £50 in cash in her purse. (It really is a most amazing coincidence…)

So the situation is something like the diagram below. We see that I have nothing that Bob will accept as payment but that Carol might be able to help us bridge the gap. (I’ve added some detail to show that each person might trust each issuer to different extents – it’s not a yes or no question) 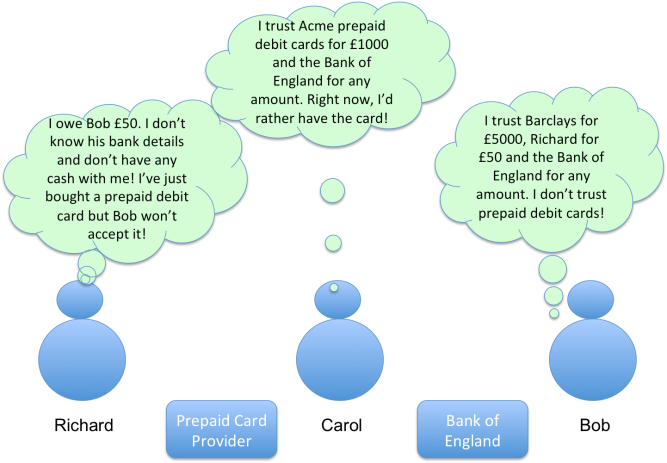 How can Richard pay Bob when there are no issuers of pound sterling that Bob trusts that Richard is able to use?

Here’s what we could do: I could give Carol the prepaid debit card (she needs something she can use online and the £50 balance is well below the £1000 limit that she is willing to trust the card company for) and she can then give the £50 in cash to Bob. Bob is happy to take the cash: he also trusts the Bank of England, the issuer of the notes.

Great: Bob now has £50 issued by somebody he trusts. I’ve managed to pay Bob what I owe him by enlisting the help of a prepaid debit card provider and Carol… even though Bob didn’t trust the prepaid debit card and he doesn’t even know Carol. 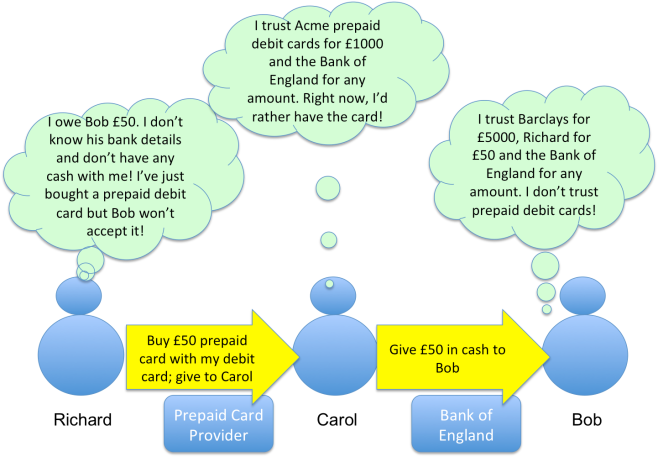 Richard can pay Bob by “rippling” his transaction through multiple issuers and intermediaries, finding a route of trust that wouldn’t have been possible otherwise.

Yes, yes, I know…. It’s an utterly contrived example.  But it makes the point: not all pounds, dollars and euros are the same. It all depends on the issuer: when we open a bank account in the UK, we’re saying we trust that bank to issue GBP liabilities to us.     When we lend £50 to a friend, we’re saying we trust that friend to issue GBP IOUs. And we all trust different groups of issuers and to different extents.

So how does this relate to Ripple?

The answer is that Ripple is a general purpose ledger and payment network based on the key insight that when you try to pay somebody, it’s only going to work if they end up with an asset that was issued by an issuer they trust.

The lesson of all this is that if you’re going to build a system that represents real-world currency balances and make payments between them, you really need to think about who issues those balances.

And once you get this point, the point of Ripple becomes clear:  it’s a way for one person to hold funds issued by issuers he or she trusts – and to pay anybody else by transforming those funds into balances issued by issuers that the recipient trusts.

Sure – there’s more to it than that…. But once you get the idea that any individual participant will only trust balances issued by certain issuers, the whole point and design of the network becomes clear.

But this isn’t really about Richard, Bob and Carol: think about the banks themselves and major corporations

The example in this post feels contrived, because it is.  But imagine you’re a major bank.  You have precisely this problem: you have correspondent banking arrangements around the world.  You have separately capitalised and regulated subsidiaries around the world.  And you need to make payments to people and firms all over the world on behalf of yourself and on behalf of your customers.

You need to keep track of balances issued by hundreds of legal entities around the world and need to instruct transfers and exchanges thousands of times per day.

Today, you do this through correspondent banking arrangements, the SWIFT network and multiple other intermediaries and communication platforms.

If I understand the vision correctly, Ripple sees itself as a universal, distributed ledger for simplifying and rationalising this complicated landscape.

Will it work? Will the banks and major firms adopt it? Who knows. But the underlying insight is deep and it feels like they’ve figured out something that is important.

Postscript: What about Bitcoin?

It amuses me when I see Bitcoin and Ripple discussed in the same context because, for me, they’re completely different.   The core of Bitcoin is all about building a trust-free decentralized transaction ledger for tracking the ownership and transfer of scarce tokens – Bitcoins. And the whole point of Bitcoins is that they are counterparty-risk-free assets: my Bitcoin is not somebody else’s liability.

By contrast, Ripple is all about dealing with assets that are somebody else’s liability. So the focus in Ripple is on representing liabilities issued by identifiable issuers and enabling them to be transferred between individuals on a network.

They share some similarities but they’re not the same thing at all.